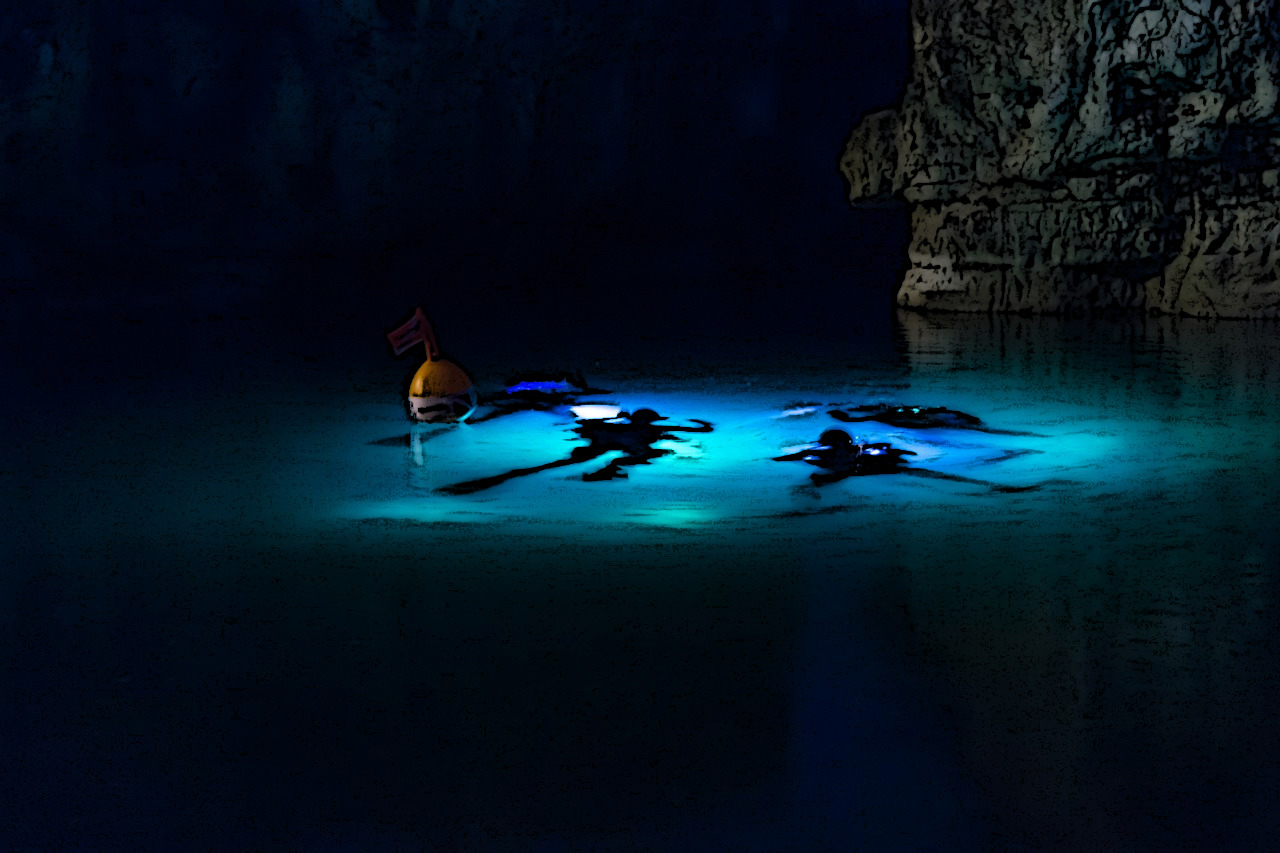 I just did my first night dive in January. I just did my first night dive after being told on the boat beforehand that there’s a 4 foot, white-tipped reef shark that hangs out in the area; that it’ll probably be swimming around us checking us out but we won’t be able to see it, what with us being clumsy humans out of our element down there and our visibility limited to what our torches will illuminate, and all. The shark is apparently super active at night. Why did I decide I wanted to try this/give this a shot?

The shark probably wouldn’t hurt us, not that it couldn’t, we were told. It would be more curious than anything else. But if it did attack, for whatever reason, it would only be able to do so much damage anyway.

We had cruised out to the Pelican Rock dive spot from inside the Cabo San Lucas Marina just us the sun was finishing its descent for the day. As opposed to diving during the day, we were able to suit up earlier in the trip on the boat without overheating. In addition to thicker, long sleeve wetsuits, we would also be donning hoodies. The water would be colder with night coming on, not that the Pacific had been that warm during the day this January in the Los Cabos area anyway.

Indeed, as we sat there waiting for the sun to disappear and night to truly come on, the water was looking certainly dark enough already. I had never dived with a hoodie before, so that would feel slightly different with the goggles and so on. What’s more, I had definitely never dived and thus was not accustomed to diving with anything in my hands, and we would be using torches to cut through the obscurity. Oh, and we should be sure not to drop them.

Got it. Unfamiliar gear, stuff in my hands, don’t drop anything, won’t be able to see past the light cast by my underwater flashlight, shark darting about. Sweet, let’s do this. Goggles prepped…weight belt on…fins on…tank on…goggles in place…regulator in mouth…free hand over face…giant stride entry…splash!

Once in the water, I began thinking of the shark less and less, and fairly quickly. I ran through a mental check of all my gear to verify it was working properly. I began easing into what I guessed was only my 16th dive. A few friends of mine have some 80+ dives to their names.

We were given the signal to descend and I struggled to submerge myself, even though I was sporting additional weights on my belt to counteract the additionally buoyancy of the extra wetsuit material given the thickness and amount of what we were wearing. When I had that figured out, I then inadvertently kept finding the sandy bottom of our starting point. It was strange. I couldn’t visually gauge my depth or where the bottom was very well. How unusual to be in control of my sole light source, as opposed to mother nature and the sun being in charge of it. Yet, as I adjusted, I continued to relax.

Then, as if to say, “Here, let me help you”, we came across a giant sea turtle, tranquilly sleeping in a crook among the larger rock formations on its belly in the seafloor sand. Our small group of four, one couple from the United States, our divemaster, and I, paused to admire it for sometime. Unfortunately, it’s possible that we stopped to admire it with our torches for long enough that we might have even awakened it. The sea turtle didn’t move, at least. We, however, once again did.

During the dive, we were treated to nocturnal sea life, very much awake, including lobsters, eels, and certain fish. The light from our torches seemed to alternately attract and bother the sea life, depending on what it was. How nice it would be to use night vision goggles instead of risking pestering the sea life. I mean, US Navy Seals can’t be diving with clunky yellow underwater flashlights, right?

Occasionally, I would wonder what the shark was up to. Was it swimming somewhere around us or near us observing us, as our divemaster had suggested it might? I checked for it here and there by throwing the light of my torch into the black abyss of the sea, but of course I never saw it. Not a one time. Not even a fin.

The massive discrepancy between the shark’s capabilities down there in that environment versus mine were starkly clear. No matter, the dive was greatly calming and it was wild to dive sea walls in the dark. Now, you especially couldn’t see how deep anything was. Parts of the area seemed pretty deep. That was surprising to me, given how close to the mouth of the marina we had plunged in.

There’s evidence that cold water can help one feel ready for sleep. And I must say, as the dive went on, I felt unusually more and more at peace. It was extremely relaxing after all was said and done. I was happy as a clam.

After we surfaced, we were asked by our divemaster how we liked it. We all responded with enthusiasm. As I passed my fins and tank up to the captain on the boat, I felt so relaxed, indeed, as to even feel a little bit groggy.

Back onboard, we quickly got underway and I threw some warmer layers on. It had been a blissful experience. I thought about the shark again. I still think about it today, just out of curiosity, actually; I wonder how it’s doing, how it enjoys its spot night after night…

I dived with Manta dive shop. It’s located at one end of the marina but tucked away in a far flung corner and a little difficult to find, so give yourself some extra time to get there. The staff were well organized, though, and our divemaster was great. Paco, a chill guy from South America.

As for the dive site, it was decent. Yeah, there was some floating sediment (it wasn’t the Caribbean off the coast of Belize) but it worked, there was ample sea life, and the activity itself was worth it, especially if you don’t want to commit to a two-tanker that takes up a good chunk of your day. That being said, I would still love to catch an octopus at night. Guess I’ll have to go again…